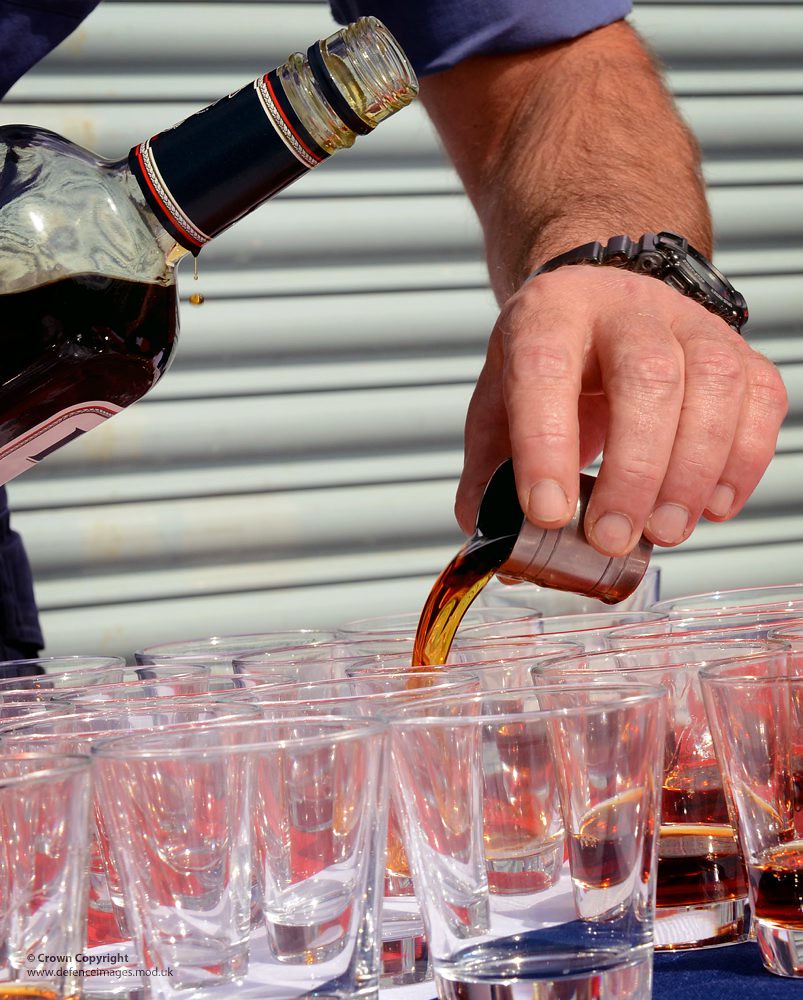 Splicing the mainbrace - with thanks to Defence Images

After the festive season many of you will be thinking of giving your liver a break for January. The next serious sessions may be at the beginning of the sailing season in a few months’ time. Yachting and alcohol don’t always need to go hand in hand – though some say that being an alcoholic helps in the yachting world, you don’t have to imbibe to enjoy the sailing scene!

In the last week I saw a post from someone in a sailing group saying they were cutting loose and heading down to the Bahamas to cruise away their retirement. The problem is they are sober and in recovery from alcoholism – they asked what they should do?

Some research shows a Facebook group set up many years ago to encourage dry boating but this has died a death of under-use. Other than that the message to the guy was to politely refuse, even if the offer from new friends was very strongly put.

If you are in recovery you need to remind yourself that not even one drink is acceptable. In your case, announce you are in recovery and the host hasn’t a pot to piss in regarding their argument you should booze with them – they will have no choice to back down! For others, doesn’t it pay to go against the grain and refuse? Just say you’re giving your liver a break this month/year. Again they can’t then push you.

Where it comes to yachting and alcohol they can be a dangerous mix. Though you feel warm after a strong drink, that comes from the body forcing blood out of your core and to the surface of the skin. If you hit the water, perhaps stumbling on deck and overboard or tripping on the dock, that blood will cool rapidly and you could be in trouble due to hypothermia in short order. In short they have a lot less less time to get you out before you fall unconscious. At sea that could be fatal.

Everyone with a bit of sailing experience will have a story or two about their own/someone else’s antics while pissed as a fart. I was supposed to be working in the rigging on the tall ship I called home in Boston, Massachusetts while watching a cheerleader selection contest on the dock. 50ft above the deck and seriously hungover in the bright sunshine with the dancing girls before me, I dozed off. Someone on deck noticed and grabbed the mainbrace and shook it hard – it took me a half second to remember where I was and hang the hell on – I cussed him out and everyone laughed. If I’d fallen asleep I could have fallen to my death.

Where laws aren’t straight on boozing at sea then as a general rule, you can have a laugh while ashore (as long as you’re not doing maintenance in the rigging!) but as soon as you leave the dock then straighten up. That could save your life.

Alcohol and the law at sea

If you are on a commercial vessel at sea in UK waters you are subject to similar laws to car drivers. The Royal Yachting Association has fought off attempts by government to legislate against people being pissed at sea when on a leisure craft. I don’t know what the stats are but I’d hazard a large proportion of incidents at sea here are alcohol related. In theory you could be piloting a 60ft gin palace at 30 knots while off your tits and they can’t bust you.

According to the RYA however, “Locally, most harbour authorities have harbour byelaws under which they can prosecute if boaters are found to be under the influence of alcohol when in charge of a vessel.” That means you should have at least one person sober while in port, and the mate/skipper sober when entering or leaving port. Need we say that sound travels across marinas so you need to keep it quiet after 23:00? If you don’t some local skipper and crew could enforce their views upon you and trust me, a sober person fights better than a drunk person!

Many other countries in Europe and beyond have extremely tight limits. It pays to check before heading there, but largely their blood alcohol limits are similar to drink driving laws – and UK blood alcohol limits for driving are some of the most forgiving in the region!

Onboard Space won’t ruin the party

This article on yachting and alcohol is brought to you by Onboard Space – a social economy yacht crewing agency. If you’re a skipper looking for crew or crew seeking a skipper, then sign up today and get ready for the 2020 sailing season!