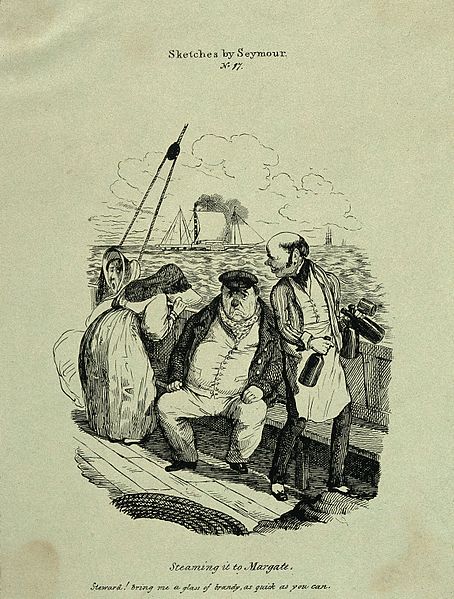 From the Wellcome Collection

Seasickness – some will go green as soon as there’s a ripple of water, others will go down later while a lucky few will never get it. Who are you?

For the skipper and crew not suffering so much you have to start nursing those who are ill. Why? The worst symptom of seasickness is suicide. Let’s now look at how a skipper or crew can help each other when someone goes green around the gills.

The first thing to remember is that while some people can reduce the symptoms they feel, there will always be those who get seasick no matter what.

Great sailors like Admiral Lord Nelson are known to have it – the famous British admiral who defeated the combined Spanish and French fleets at Trafalgar is known to have been sick as a pig for his first two weeks afloat! This is why getting seasick isn’t a strong preventer where it comes to sailing – many people still love sailing even while they suffer the condition.

For those (like me) who don’t get seasick we need to go into nursing mode as soon as we see someone feeling unwell. They may not have chucked their lunch yet but are still feeling incapacitated. Get them on deck as soon as they feel rough and make sure they are clipped in so they can both put their lunch in the sea (not in the cockpit!) but stay comfortable and out of the way.

The reason you get the crew or skipper on deck is so they can see the horizon. Seasickness comes from a confusion in the brain between the balance organs in the ear giving one set of signals yet the eyes not seeing movement. For many, as soon as they see the horizon they feel more comfortable.

Though counterintuitive you should get them to eat salted cheese crackers (saltines) or salted potato chips (crisps). It feels more comfortable to chuck up something than it does to dry heave. The basic starch from the chips or crackers can line their guts and make them feel a little better, while salt is a nutrient that the body needs. Keep them hydrated with weak tea or water. Dehydration can be a killer.

If someone knows they feel seasick yet really wants to sail anyway there are medications available that have been shown to work well. Currently, the same medication given to women with morning sickness such as cyclizine has been shown to be very effective. Speak to your doctor about antiemetics, and you may well avoid being the one sitting green and listless in the cockpit!

The misery of being ill can kick off the idea that the sufferer is in the way and is taking up crew time instead of allowing their fellows to go about normal duties. If left to their own devices the sufferer may unclip their harness and slip over the side. There are far better reasons to kill yourself in this world than being in the bloody way on a minor passage!

This is why those who administer to the seasick crew need to be cheerful and go about their work with a cheery demeanour and not a shred of resentment. You need to project that they are important and indeed loved by those around them. Really this is why you shouldn’t allow a stroppy teenager anywhere near the job as they really won’t help!

What’s this to do with Onboard Space?

At Onboard Space we want people to come together to enjoy this fantastic pastime. You never know – you may be the newbie aboard and end up administering to the whole crew as you discover you are one of the lucky few who don’t get it! Ultimately life at sea is all about the comfort of all aboard – skippers and crew. This is why everyone should be aware of the best ways forward in such circumstances.